The following includes a recap of this year’s Grosse Pointe Birding Challenge, a yearly tradition which was started back in 2005. During each challenge, individuals or small teams pair up to count birds within their assigned Grosse Pointe territories. This year’s competition included Bill Rapai in Grosse Pointe City, Mike Florian, Judy Florian and Tina Bresser in GP Park, Mark O’Keefe in the Farms, and Andrea Rose (first timer!) and myself in GP Woods.

This year’s event was held later in the month than usual, which accounted for a markedly lower total species count than in years past. However, with a total of 66 bird species seen by all of the teams, and perfect weather throughout, it was still a great day for some friendly competition and bird watching.

The Challenge started the same as all others – listening in my yard as the birds make themselves heard. First is always the Common Nighthawk, who begins to be heard at 5:15, such a welcome song returning to the neighborhood. I assume they nest on the elementary school rooftop as I often see them in display flight just above the school.

Then came the ubiquitous American Robins, singing from every area of the neighborhood. I am very fortunate to have nesting Northern Cardinal as a constant, such a beautiful song! The volume of the Tufted Titmouse seems abnormal for a small bird. It can be heard above all other bird songs. An American Goldfinch is  singing from its usual place in the neighbors birch while the Red-bellied Woodpecker called from my oak tree.

I observed a Black-capped Chickadee picking midges out of the air and landing back on the wire while a Blue Jay zipped through the yard. The House Wren had started what would eventually be a long day of perpetual singing. With the last bird sighted, a Common Grackle, I was off to the lakefront park. Not a bad start with ten species while I loaded the car.

The park delivered the usual species including Canada Goose, Barn Swallow and Eastern Kingbird as well as the Purple Martins nesting in the provided housing. Unfortunately, House Sparrows and European Starlings are also using some of the housing instead of the occupancy including only the intended birds.

The waterfront turned up Mute Swan, Tree Swallow, Mallard and Ring-billed Gull. It was notable that a Double-crested Cormorant was not seen.  Also absent were Chipping Sparrows, who usually nest in the spruce trees near the activity center.  Rough-winged Swallows entered the crevices between large sandstone rocks on a homeowner’s lakefront.

Along the fence line near the Ford House, Orioles were in abundance.  I had a quick glimpse of a small bird, so fast I could not get my binoculars up for a better look. I decided to pish, which consists of making a sound that tends to prompt investigation by nearby birds, ideally leading to an accurate ID. This time it worked! A Northern Waterthrush appeared, giving me great looks as it turned its body side to side rhythmically, like the pendulum of a clock, a tail flourish for emphasis with each turn.

After that magical moment, I was treated to another. There were two large birds on the ground, bouncing in synchronicity on the lawn, moving forward with each bounce. Thankful or my scope, I had great views of these male Northern Flickers. They flew to a nearby tree trunk, landing close to each other and low to the ground. The Flickers moved  sideways along the trunk in short little hops, first one way and then the other, their eyes never leaving each other. They looked stunning against the tree bark which had the greenish cast of some type of moss growth. After five solid minutes of posturing, they flew further up in the tree then away from the area.

The mature trees of the Edsel & Eleanor Ford House usually turn up a number of warblers and did not disappoint this year. I was treated to the song as well as good views of Black-and-white Warbler, Blackburnian Warbler, and Blackpoll Warbler, which turned out to be our most common warbler of the morning. 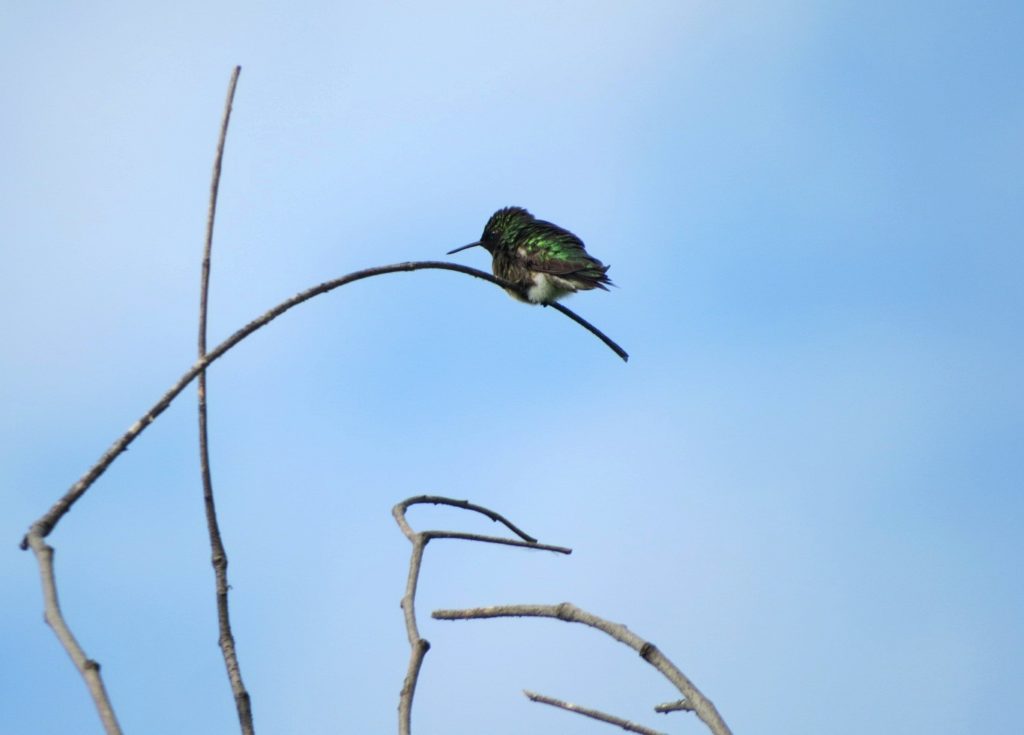 Once I covered the park, it was time to head over to the good habitat that is found at Lochmoor Country Club. I was fortunate to meet up with Andrea Rose Meldrum and we indulged ourself in a birding morning together. Lochmoor has wonderful natural areas and this year there were many areas that were mini-wetlands. This is where we found a Canada Warbler singing from deep within the tangle, had the male Ruby-throated Hummingbird on his customary snag of bare branches, and four young Killdeer following their parent around. Brown Thrashers were in a few places at the edges of the woods, American Redstarts sang from a number of places in the woods, and a peek into a break in the foliage revealed three male Wood Ducks sitting on a fallen log.

There has been a pair of Red-tailed Hawks nesting at the Club and we found one sitting on the tall pole that holds the netting in the driving range. Another one called and that brought our attention to look for the mate. We witnessed the bird fly over to a maple tree, break off a branch with leaves, and fly with it over to the nest tree. What a sight! 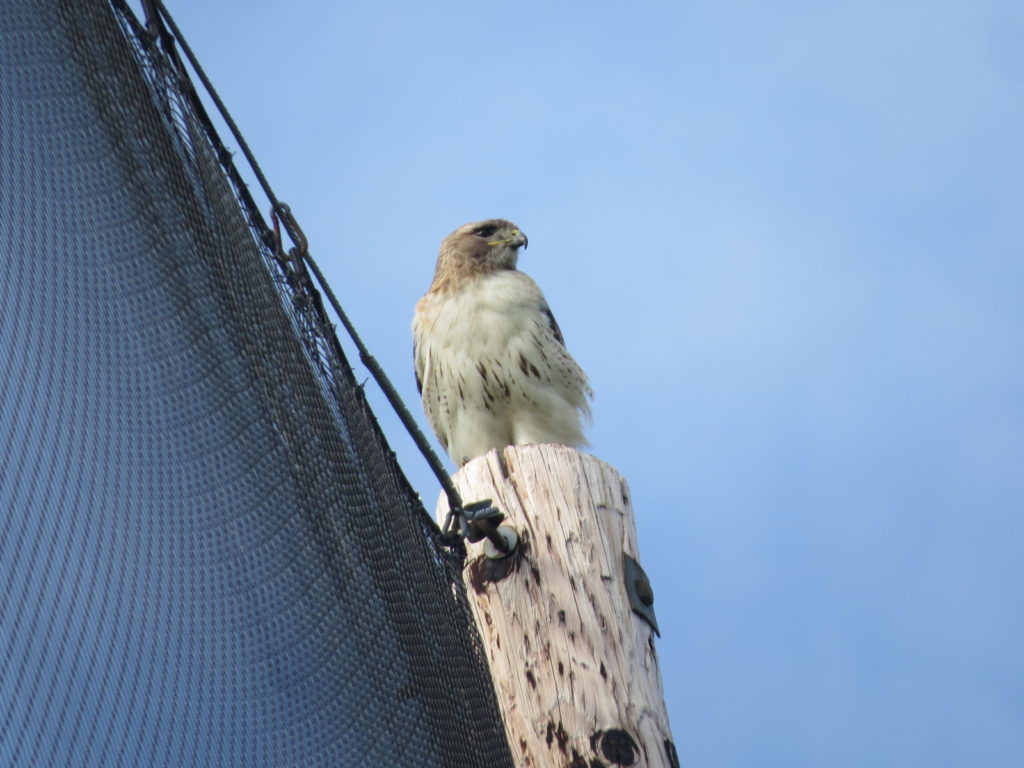 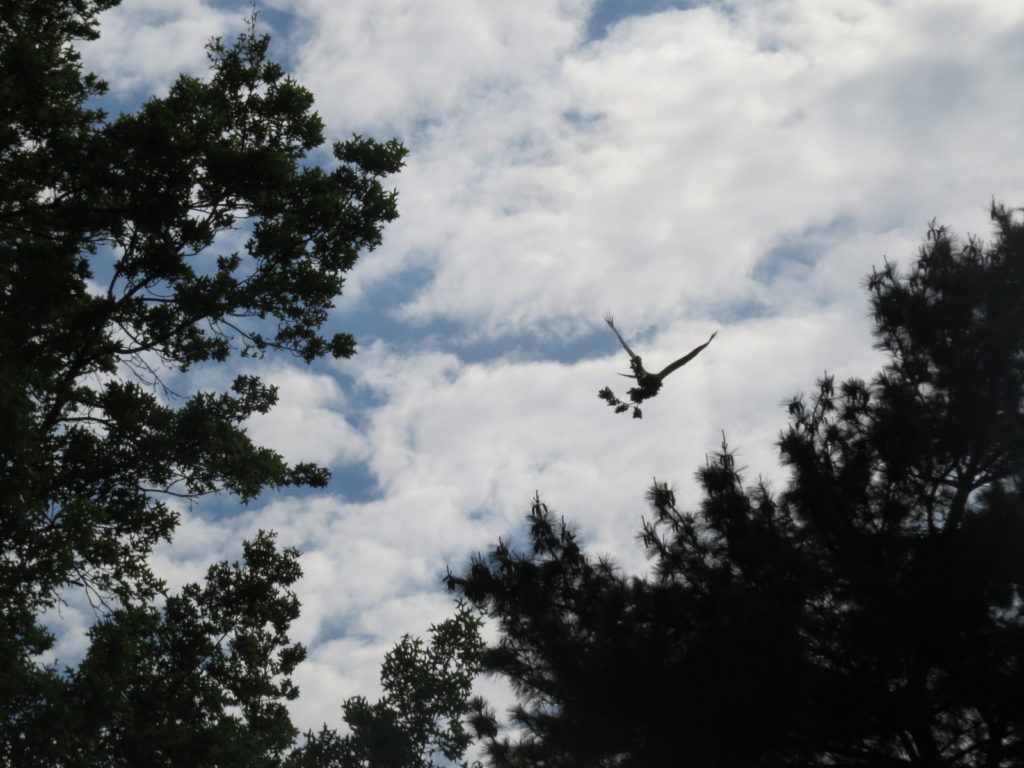 Perhaps our rarest bird of the morning, an Olive-sided Flycatcher, was sitting on the top of a tree, a behavior that is common for them as they survey the sky for flying insects. We had the bird fly several times and we able to relocate it each time to get a little bit of a different view. It was especially gratifying for Andrea to have the back view of the bird, allowing us to see the white tufts on the sides of the rump, a classic field mark. It’s gratifying to be with someone when they see a bird for the first time, a “lifer” and it was obvious that Andrea was enjoying her views of the Flycatcher as well as the photos she was able to take. 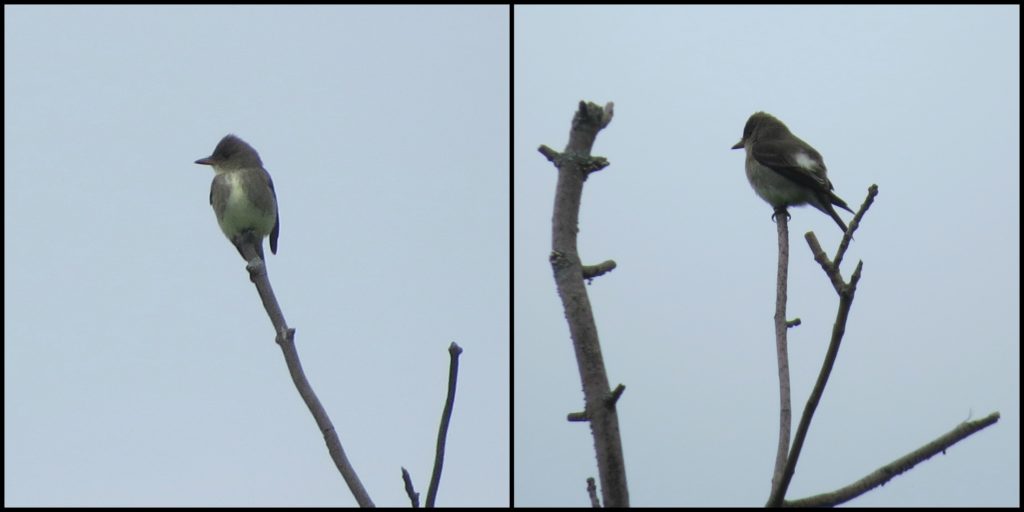 The tree canopy on Heather Lane is another good habitat for warblers and proved that point with a load of Blackpoll Warblers and an additional species – Yellow-rumpled Warbler.

Our next few stops were not as productive as usual, perhaps owing to the later timing of this Challenge. The Hunt Club did not turn up a Chipping Sparrow either, although it was the only place we had House Finch, singing his heart out from atop a weathervane. Ghesquire Park was unusually silent and we found ourselves walking away from a lack of White-breasted Nuthatch and Cooper’s Hawk, much to our disappointment. However, we did run into a Wild Birds Unlimited customer who exchanged memories of living near this park, and who was very helpful in showing us some possible Cooper’s Hawk locations as we scanned the trees above.

Besides, a morning birding is always a joy, and finding suitable bird habitats in our assigned city is continually hopeful.

At 12pm sharp, we all met at the Panera in the Village, and compared our tallies. For a little more excitement, we added a “bonus bird” to the challenge, meaning anyone who found this bird would be awarded a few extra points. The bird in question was a Scarlet Tanager, and Mark O’Keefe was successful in finding one in the Farms. Mark called this his favorite moment of the challenge, saying, “I heard its up-and-down song that is so similar to a robin’s song. The burry quality made me think it was a tanager. I listened for the distinctive ‘chick-burr’ call notes, but did not hear them. Finally, I was able to locate the bird high in the trees, and got some good looks at this stunning bird.” Bill Rapai, member of the Grosse Pointe City team, was content to sit patiently in his yard, listening for birds. Some of the birds he heard at this location were House Wren, Carolina Wren, and American Goldfinch. Sometimes sitting quietly in one spot is the best way to observe the birds!

In the end, Andrea and I were able to retain the title on behalf of the City of Grosse Pointe Woods, with 56 species. The Farms had 54 (inluding their bonus bird), the Park had 43, and the City had 30. We tallied a cumulative number of species for the morning at 66, accompanied by a lot of smiles at our tally lunch.