Nothing can make time stand still and yet move so quickly as a Bird Walk in May in the peaceful setting of Elmwood Cemetery in the heart of Detroit, Michigan. 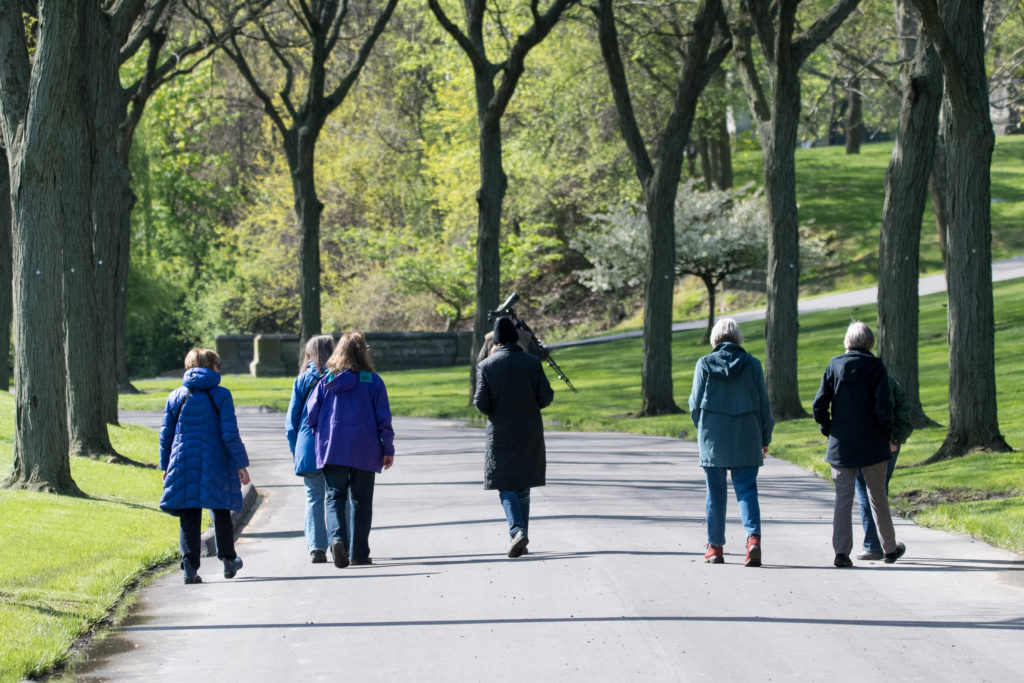 The background traffic noise is negligible and the ability to stand and listen to the bird song around you is a tremendous elixir for the mind, body and soul. Our cozy group of ten added the dimension of sound to our morning as we stood and listened to a Rose-breasted Grosbeak behind us, an American Robin to our right, a Parula Warbler in front of us and a Blue Jay off to the left as well as hearing the mechanical trills of a few Chipping Sparrows further in the distance. 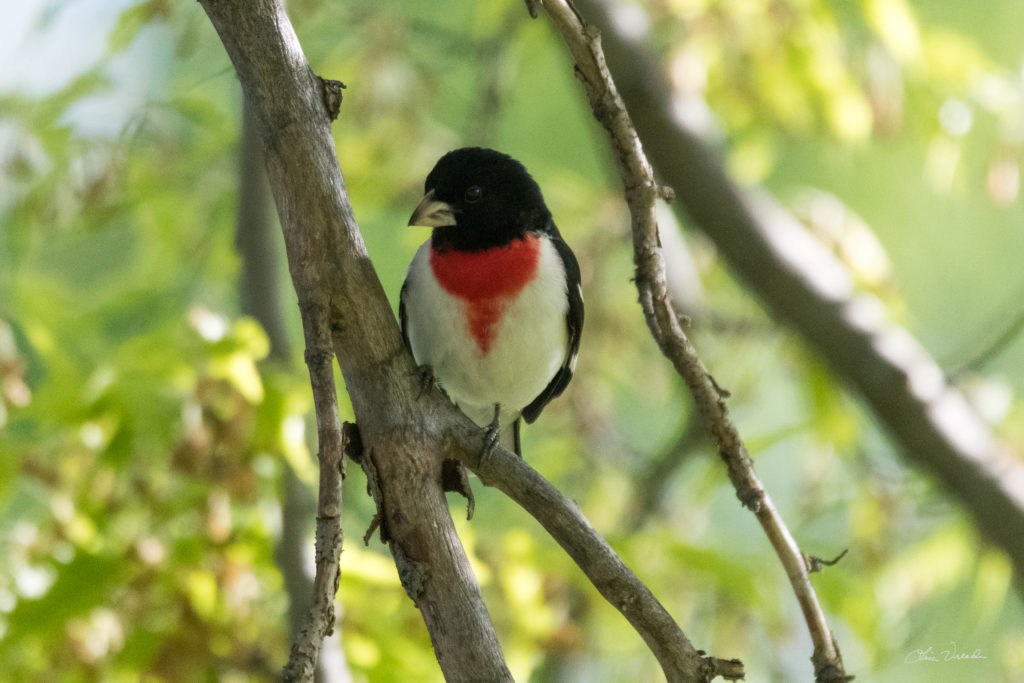 We also had lovely looks of those dainty Chipping Sparrows, appreciating their smart little chestnut colored cap, the snappy black eye stripe and white supercilium that adds a dashing look to their face. This pair was entertaining us as one kept a lookout from the top of a few monuments, while the other flew from place to place, picking up small, dead branches. Was it the female supervising the males choices or was it the male sitting and keeping a look out while the female chose the nesting material? 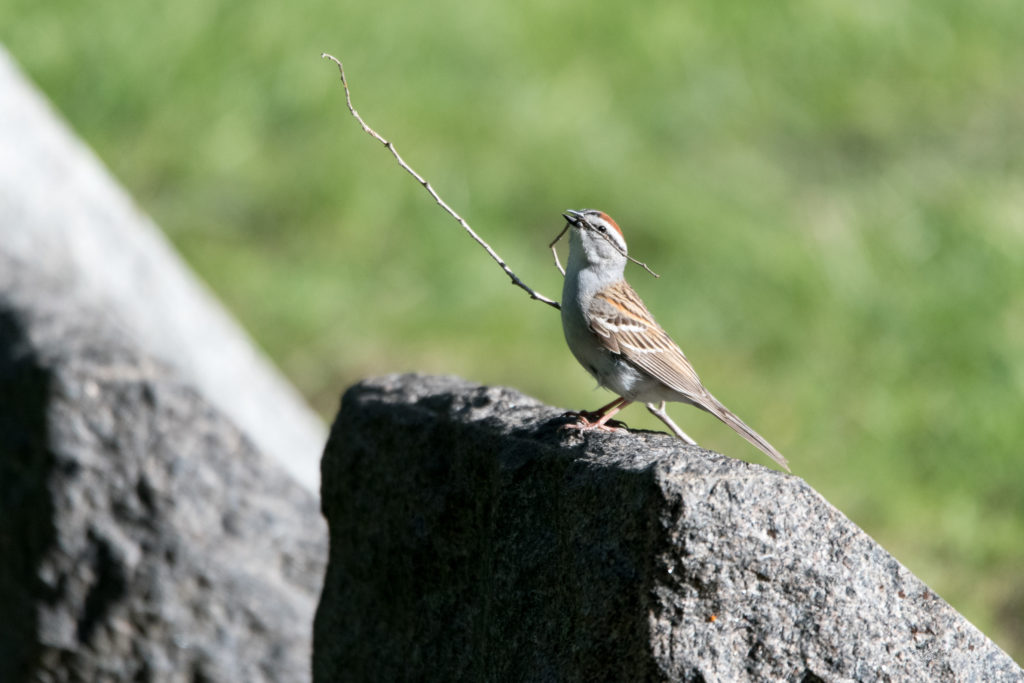 How is this piece honey?
Chipping Sparrow – photo by Lisa Vreede 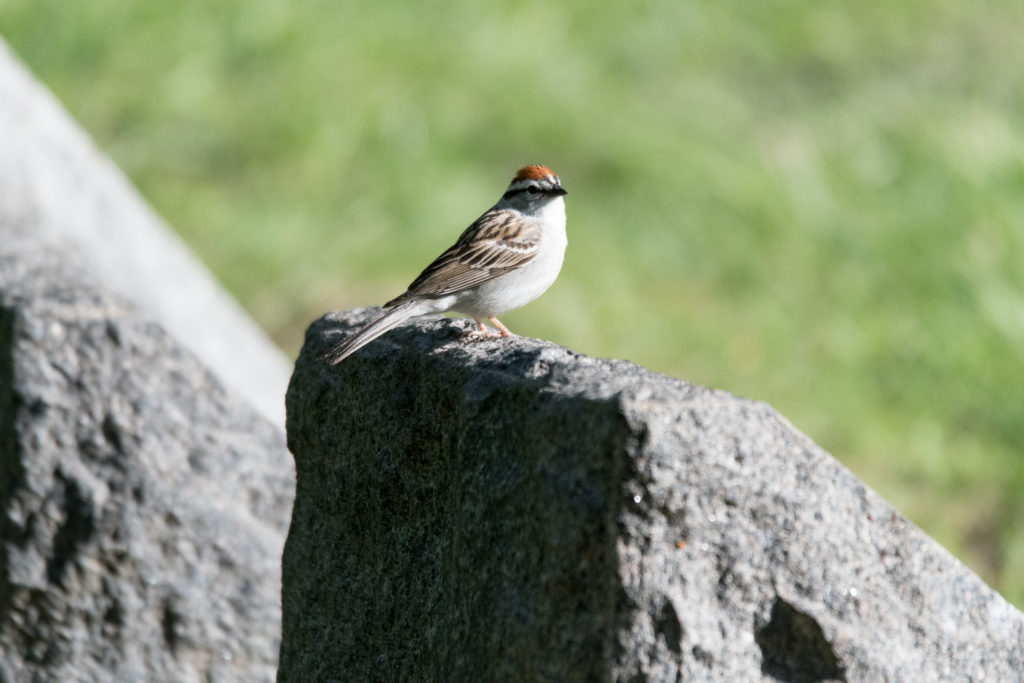 I’m not sure. What else can you find?
Chipping Sparrow – photo by Lisa Vreede

The Black and White Warblers started us off with an easy lesson in getting an active bird into our binoculars – at least they stay on the areas of a tree where their locations are relatively easy to describe and find. Looking like little wind up birds, they crept and turned up and down and over the branches in search of insects. While they may not have exotic color, the placement of their black and white makes for a wonderful pattern to appreciate. 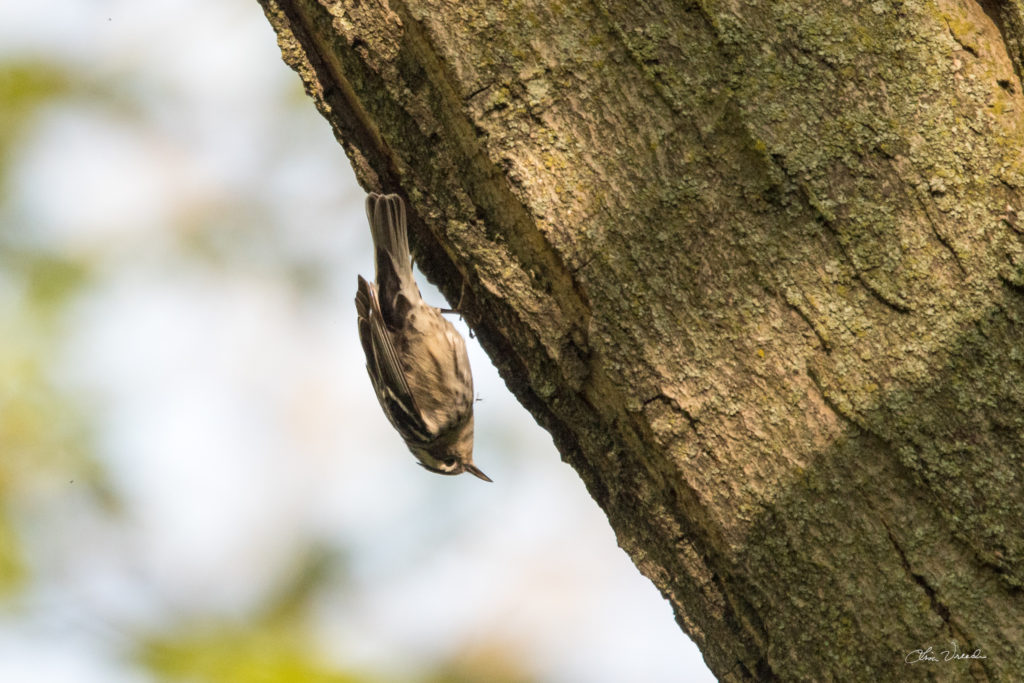 We found numerous Parula Warblers – all of them eating from the foliage on the far ends of branches, moving very slowly as they fed. If we weren’t watching them, we were hearing them. I estimate that we had at least 20 Parula Warblers for the morning. We had some excellent opportunities to see their brightly colored neckwear, the bright yellow of their throats accented by the dark and rufous breast band and the vibrant chartreuse on their back as they stretched to reach an insect morsel.

The Parulas were not the only Woodland Warblers to grace our morning. Black-throated Green Warblers were singing in many places and we had stunning views of them from lower branches including watching one grab a caterpillar that was the same glowing green as parts of the birds’ plumage. Chestnut-sided Warblers were also putting on a great show with easy visibility. 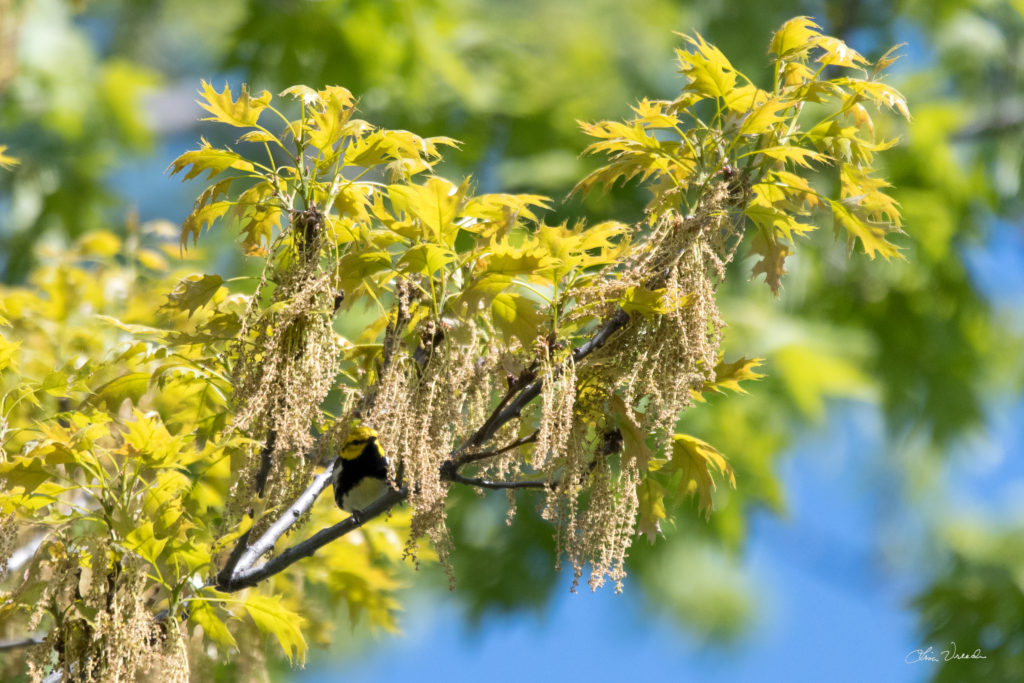 Although we did not see more than one each of a Bay-breasted Warbler and a Blackburnian Warbler, they were both worth getting “warbler neck” over. Such stunning and tiny birds and have flown so far to breed and are not yet near their final destination. We marveled at their plumage and the story of their journey. 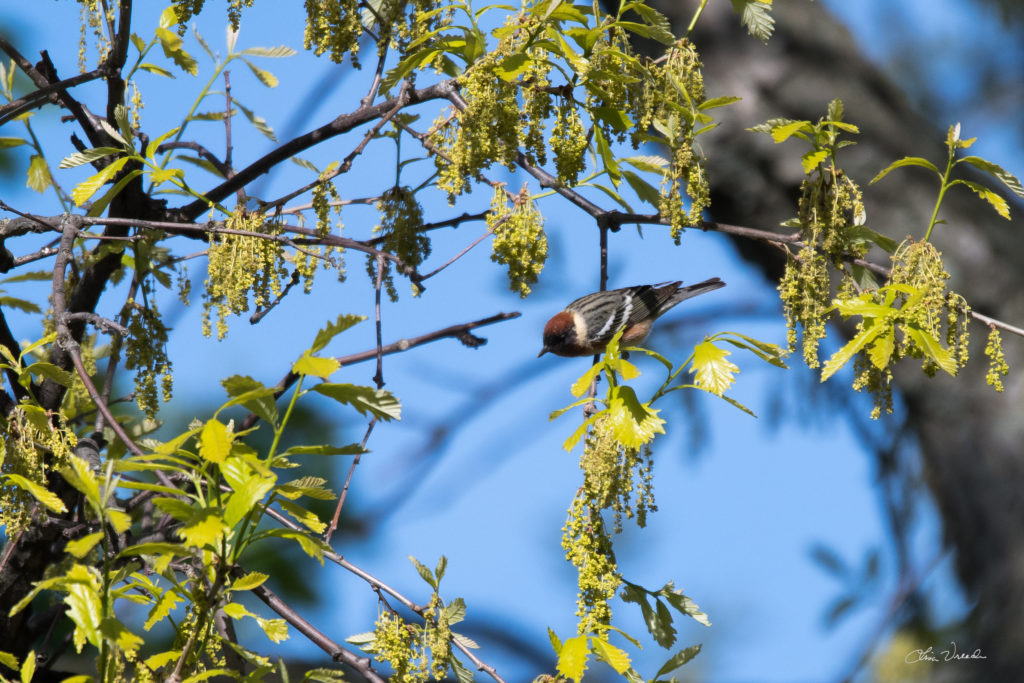 A Merlin streaked across the bright blue sky and I imagined that he would be the only bird that could catch one of the many aptly-named Swifts that were careening across the sky as well. I love that Falcon and am always joyful to be able to see one.

I was surprised by the presence of a Red-breasted Nuthatch. There was an excellent representation of species that were breeding including Northern Cardinal, Mourning Dove, Eastern Phoebe, and a very vocal Tufted Titmouse.

We were thrilled to discover the nest of a Cooper’s Hawk with one of the adults sitting tight on the nest. The other adult appeared and vocalized a few times before landing in a nearby tree where we had great views of this handsome raptor.

We ended back at the Gate House where we tallied up our morning’s species. The three hours went by so quickly. Weren’t we just here at the fence line admiring the White-crowned Sparrows? I’m so thankful for being able to share birds with the group this morning and to have the help of Jim Szelc as scope bearer and co-leader, and Lisa Vreede as my photographer. It was a delightful experience to Bring People & Nature Together at Historic Elmwood Cemetery. 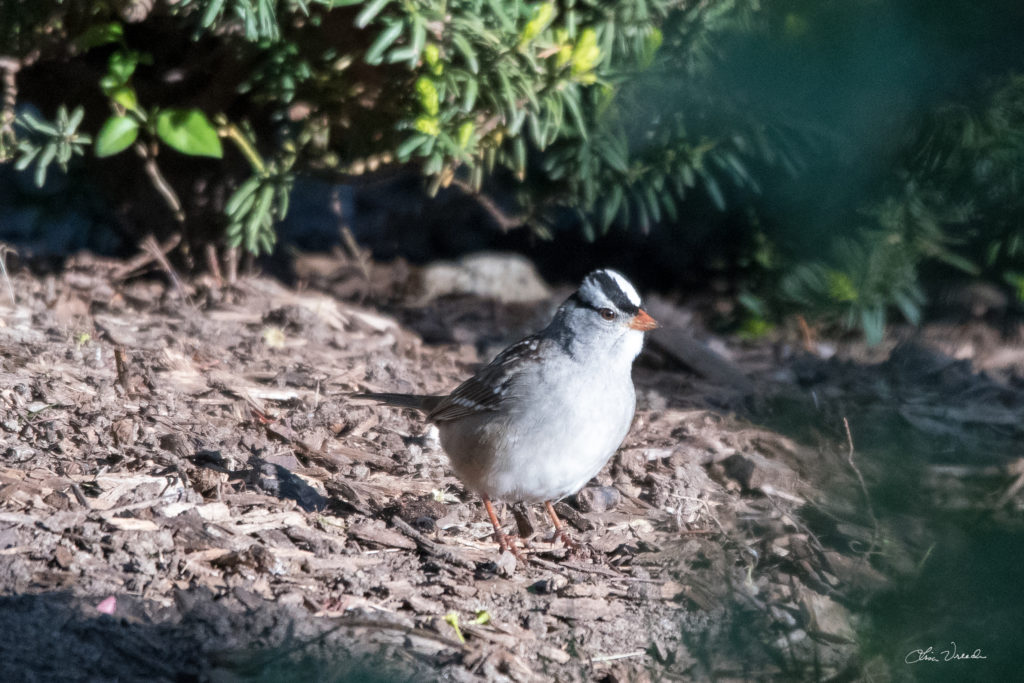