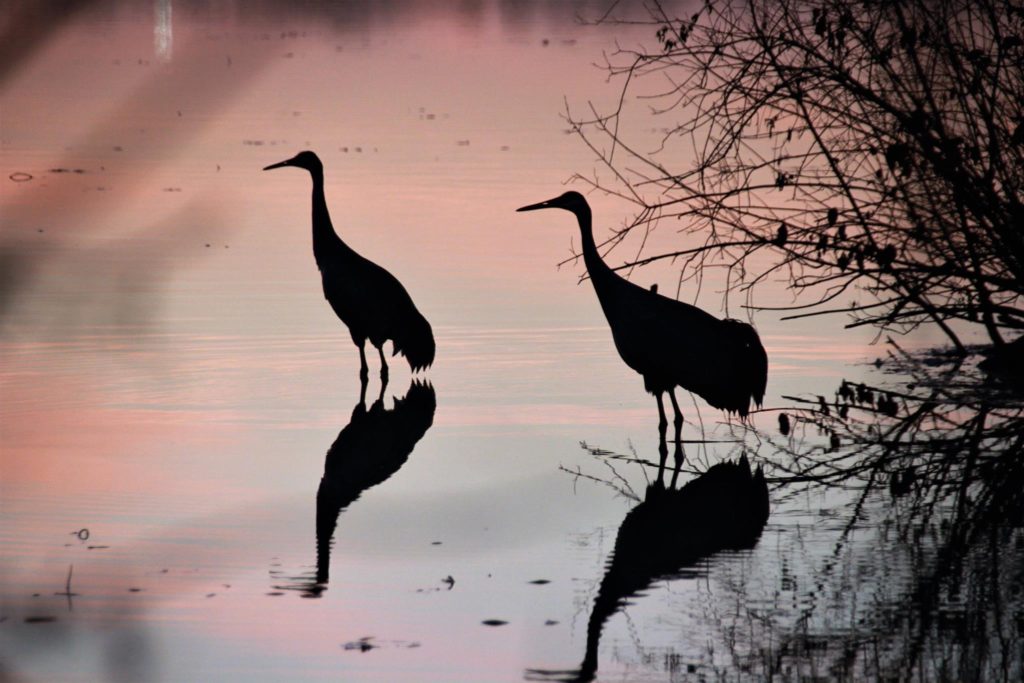 Sandhill Cranes are a common summer resident in Michigan, also using the state as a migratory stopover habitat. Jackson County has one of the highest densities of nesting populations for Sandhill Cranes in North America. These cranes use a variety of habitats for nesting purposes including shallow marshes, openings in shrub swamps, bogs and wetlands. In the early 1900’s, the population of Sandhill Cranes in Michigan had dropped to just a few dozen pairs as a result of wetlands being drained and hunting pressures. Now, we have Crane Fest, a Michigan Audubon Signature Event, as well as a number of other festivals, to celebrate this bird’s abundance.

Sandhill Cranes stand between 41 and 46 inches tall with a wingspan of 73 to 77 inches – six feet plus! They only weigh between seven and 11 pounds, as avian bones and feathers are quite lightweight. Sandhill Cranes are generally gray in color, with some rust occasionally showing in their plumage. This is a result of preening their feathers with iron rich mud. Their forehead and crown of their head are covered with red skin instead of feathers, and their eyes are a bold orange. Contrasting a little with the overall gray, the face, cheek, and throat are white or pale gray. 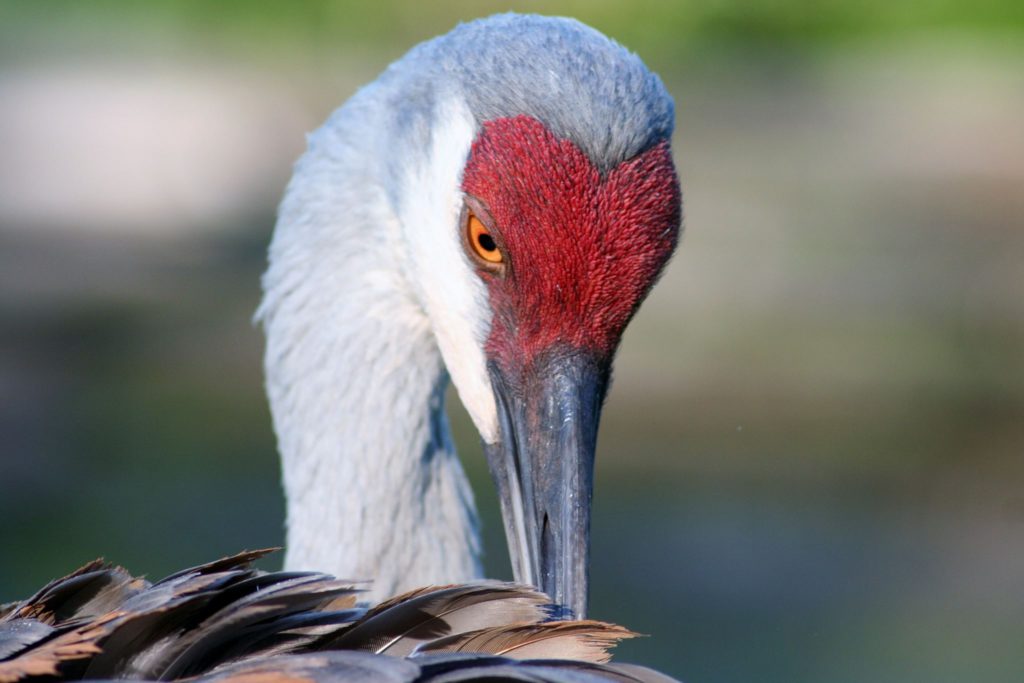 The oldest living Sandhill Crane on record was at least 36 years and seven months old, having been banded in Wyoming in 1973 and later recovered in New Mexico in 2010.

Sandhill Cranes mate for life. Partners are chosen based upon their dancing displays, where they stretch their wings, pump their heads, bow and leap into the air with their feet extended forward. This display is done year-round as part of pair bonding. One of the most primal sounds of nature is a pair of Sandhill Cranes giving their duet call. Facing each other with their beaks raised to the sky, their calls can be heard up to 2.5 miles away. The female gives two calls for each call of the male! Click here for a short video of these amazing birds calling and dancing. 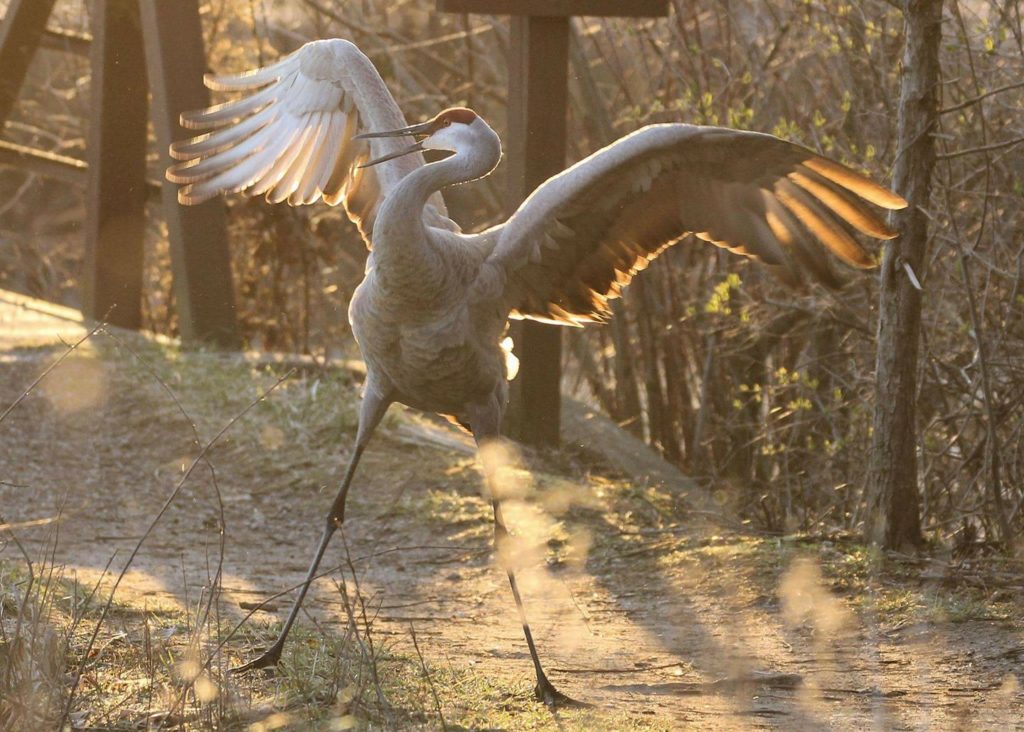 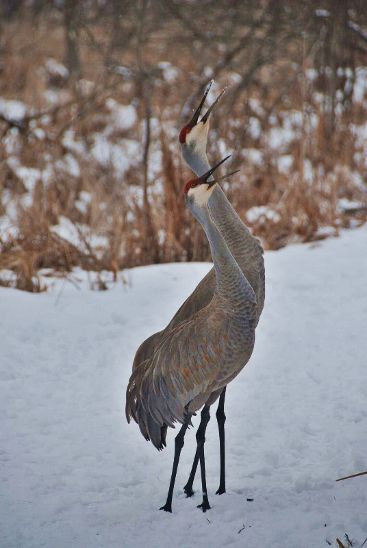 Their nests are made on the ground, formed of sticks, moss, reeds and grasses, built by both the male and female. Usually two eggs are laid although one colt typically survives. Both parents share the responsibility of brooding the eggs. Although the young are capable of leaving the nest at eight hours of age, the parents brood them at night for three weeks to help maintain their body heat. The young are unable to fly until they are 65 – 75 days of age.

They family unit remains intact throughout the winter, returning together back to Michigan in spring.  It is about this time that the parents encourage their young to join other juveniles, allowing the adults to begin another nesting cycle.  The juvenile Sandhill Cranes spend between two and seven years together before they choose a mate and begin breeding. 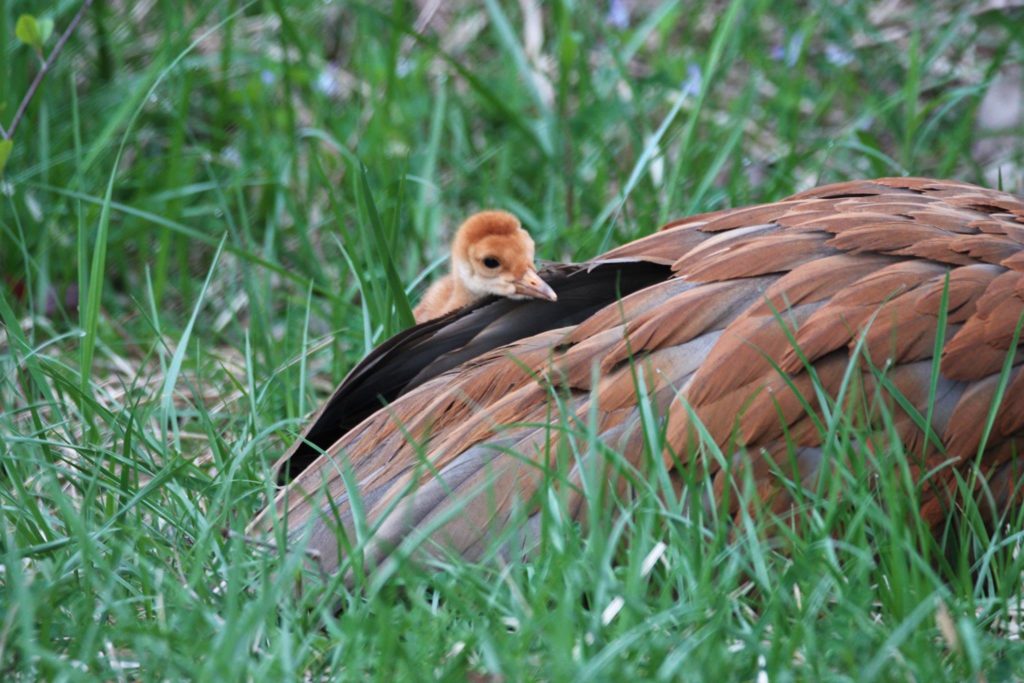 Most Michigan Sandills spend winter in Florida and the Gulf States.  In many areas of the United States, Sandhill Cranes form groups of thousands, foraging and roosting together for safety.  One of the most famous wintering roost  sites is Bosque del Apache in New Mexico, the wintering grounds for tens of thousands of these birds.

During migration, Sandhill Cranes are known to use wind thermals. Using them for lift, the cranes will rise in a circular fashion and once at the top of the thermal, glide until they need to catch the next thermal for lift.

Look for Sandhill Cranes flying overhead in groups during fall and spring migration. They fly with legs and necks outstretched and have a snappy upward wing beat. Perhaps you will hear them call – a sound you will never forget. 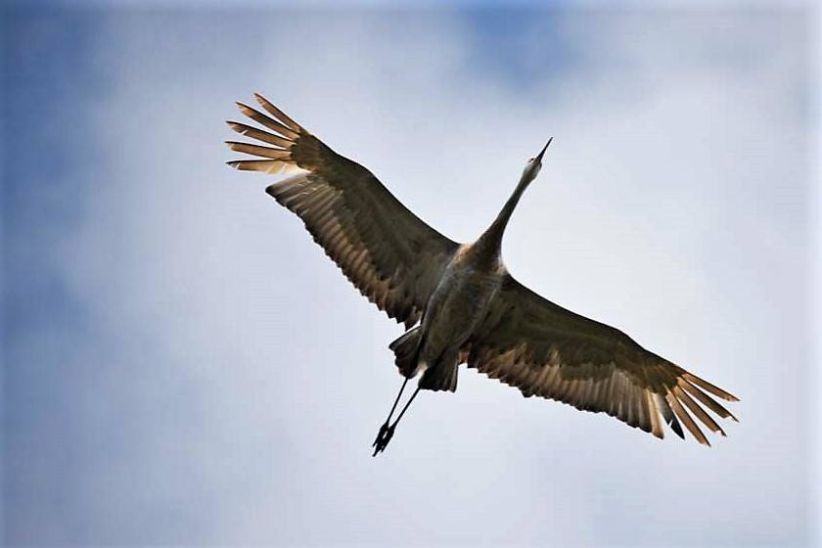