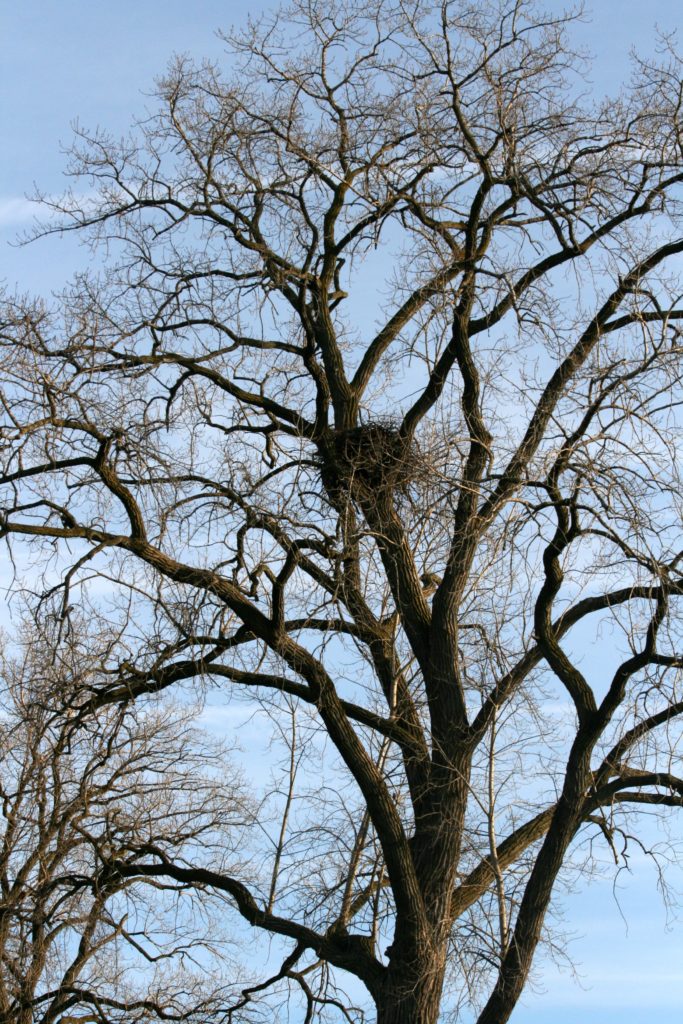 A few years ago, one of my customers came in and asked, “You know about the Bald Eagles nesting at the Country Club, right?”

I was so glad she asked me that question as I did not know about them, and she had a superb story to tell. With a house that faces the private club, Ms. Saurbier was able to tell me the story of how she watched the Bald Eagles force the Red-tailed Hawks from their nest in a spruce tree. The hawks relocated and the eagles began to add to the nest in order to accommodate their size. How fortunate for my customer that the lot next to her had some large branches, as she was able to watch the eagles collect and add to the nest.

With nest building starting so late in the year, 2015 was not going to be the year eggs were laid. However, to the delight of the community, there were many sightings of the eagles in the neighborhood throughout the remainder of the year. We even spotted them during many of our bird walks at the Edsel & Eleanor Ford House.

Nest building continued and in 2016, two eggs were laid. The DNR predicted that the choice of a spruce tree was not optimal, as this type of tree does not have the supportive branches needed for the weight of an eagle’s nest. True to that prediction, a severe wind storm in March claimed the nest and the eggs, which perished in the fall.

Even though it was too late in the year for another attempt at eggs, the couple remained in the area. With two years and no success, the pair decided to relocate their nest site and began to build in a cottonwood, also at the Country Club of Detroit, close to the 18th hole. 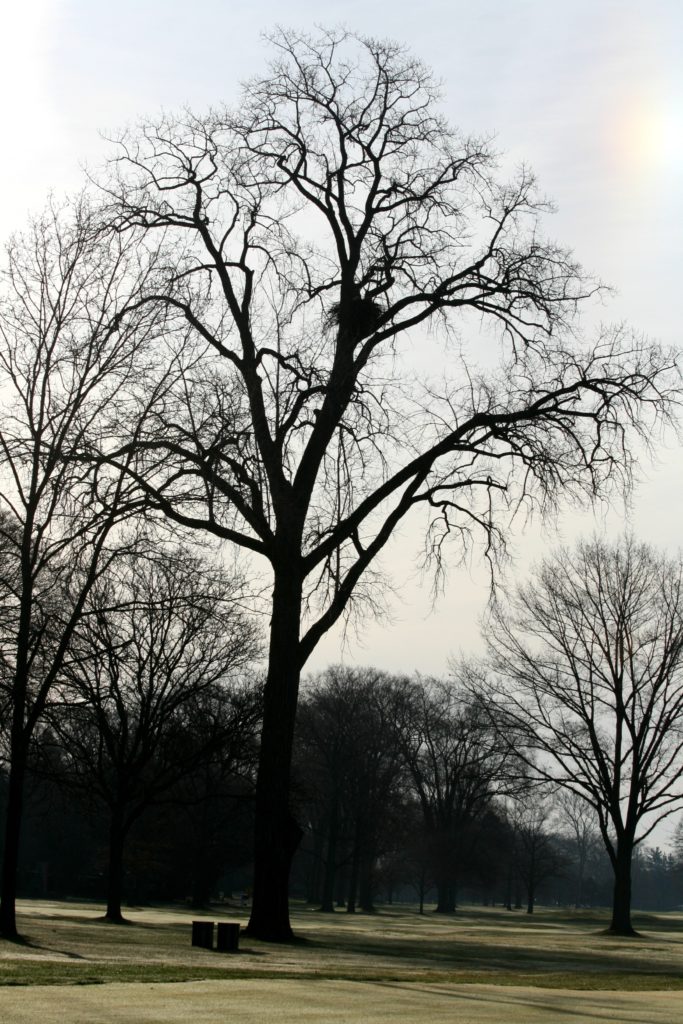 This year, I nest building was once again progressing and many reports of the eagles continued to be recounted by our customers. My brother had a chance to witness one with a Mallard Duck in its talons and another time, a very large fish. The distance between Lake St. Clair and the nest is quite short for the powerful flight of an eagle. No doubt this is the pair that is frequently seen at the Edsel & Eleanor Ford House as well. Another place where they commonly sit is in the trees at the foot of Harbor Hill. 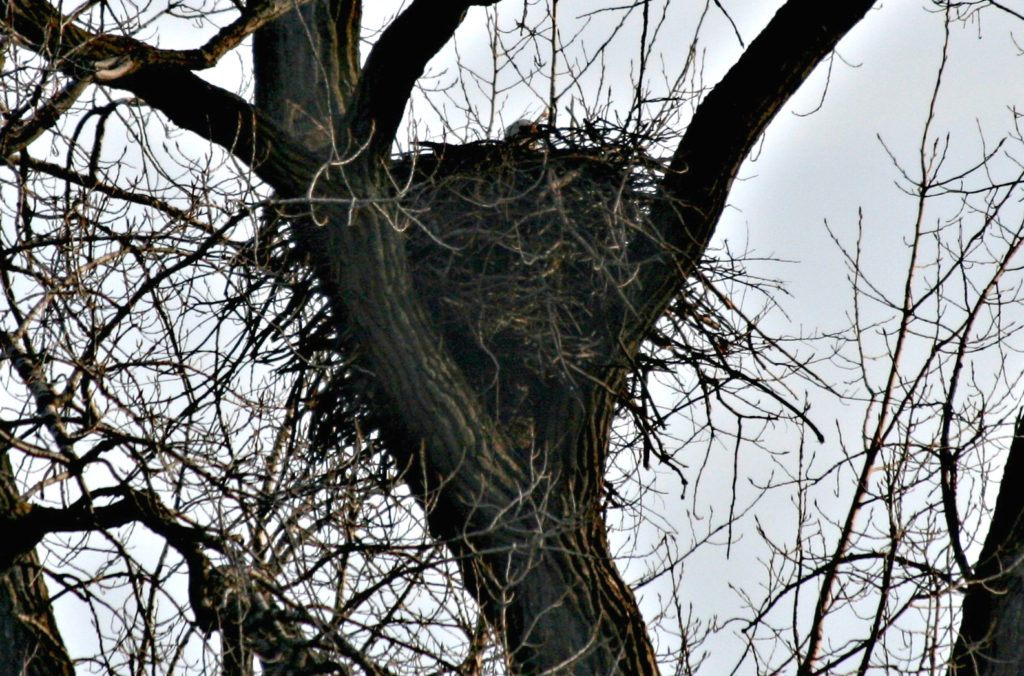 On April 1st, I went to check the nest to confirm if our celebrity pair had produced eggs. My efforts were rewarded with the sight of one of the eagles on the nest, where they remained the entire time I watched, about half an hour.  The adult watched my every move as I tried for the best angle to get the closest photo. 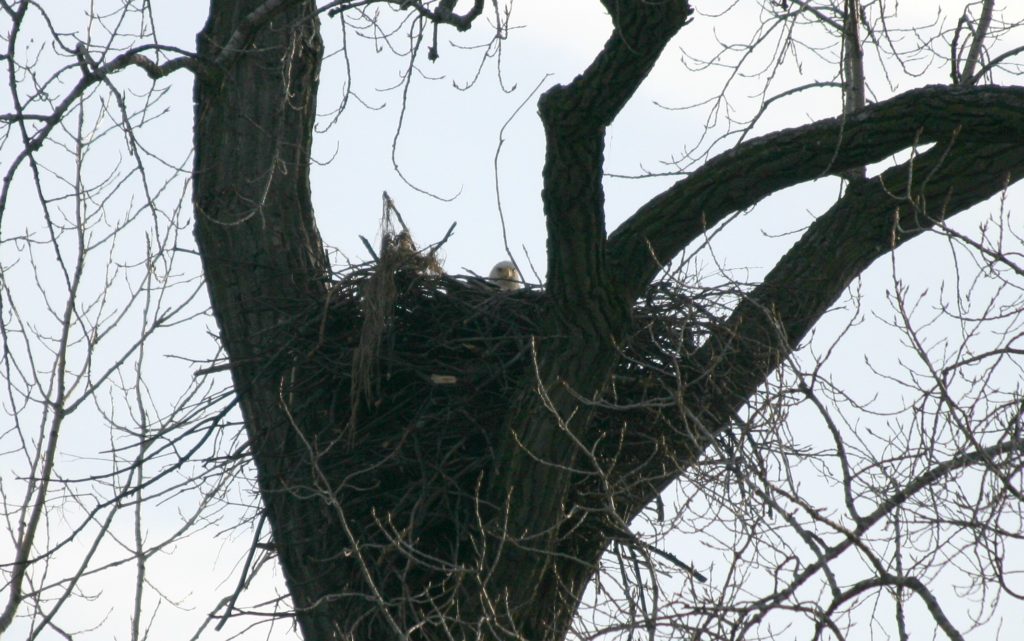 We eagerly anticipate the arrival of the eaglets. I will keep you posted on my findings and here’s to a successful year. Keep your sighting reports coming in to the store so we can pass along information to other interested customers!