I love sitting in my yard at daybreak. It’s an amazing way to greet the day. A summertime foray into the yard at sunrise reveals a wealth of bird songs. There are the resident bird families that are foraging together, as well as the migrant birds that are returning south after breeding in our food-abundant continent.

First to vocalize is always the Robin. I can hear him from the cedars in my yard, just a few soft calls. Could this be his way of making sure the babies are okay through the night? In response, a young American Robin spurts forth emphatic singular notes as if to say “I made it through the night. Where’s the best place for breakfast?”

A European Starling sits alone on the phone wire, beak to the sunrise, it’s raspy short notes singing hail to the day.

The Cardinal bursts forth with repeated songs. It takes a lot of energy to keep singing all of these months. He started in late January as usual. Although he does not sing as often as when he and his mate are breeding, there is still sporadic song throughout the day and always at dawn. I wonder if it is a territorial marker continued, letting other families know that this family of Cardinals feeds in the area delineated by song. What a treasure to have that melodious sound in my yard for so much of the year.

“Chatter, chatter, chatter”. No sign of him, but it’s an Oriole for sure. The confirmation comes with a shortened version of his song. This morning, I am surprised by another male Oriole singing a longer song from the hedge of berry bushes behind me. 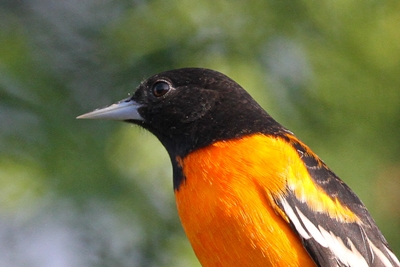 The Orioles aren’t going to find many berries left. The Eastern Kingbirds came by and stripped them clean. That was another wonderful morning. The distinctive electric song was being given by all four members of the Kingbird family. They sat on the wire and verbalized, went to the hedge to eat, back to the wire again, sometimes preening for a bit. It was a great two days to sit and listen to their raucous contact calls.

The resident White-breasted Nuthatches are just the opposite. Instead of songs, I hear them giving quiet contact calls to their young. When they move through the yard, you can always tell what area they are feeding in because of this verbal behavior.

Another summer resident in the yard has been the House Wren. The contact calls made by the parent to the fledged youngsters is consistent and harsh, much unlike their effervescent song during breeding season. 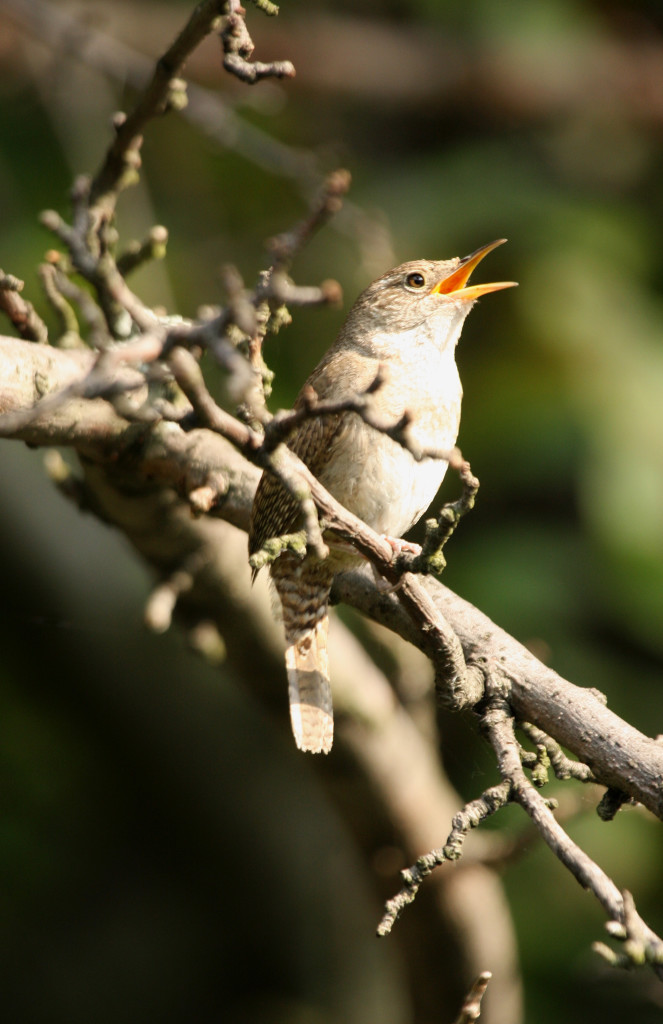 Then there is the Blue Jay youngster with the constant “wa” call which he makes into two syllables. I think he is definitely asking parents for some breakfast help.

My eyes turn skyward in response to the light version of the twittering calls of Chimney Swifts. I often see this family of five in the morning, racing across the sky and feeding as they go.

Another familiar sound keeps my eyes lifted. It’s the breeding family of Cedar Waxwings. They fly from the oak, to the birches, and then take off, all of them calling together as they fly, a high-pitched, trilled “bzeee”.

Soon the hedge in the back reveals the House Finch family has arrived. Their sound is so bright and happy. It’s a joy to listen to baby House Finches. I think it has the same touching quality as the sound of human babies laughing.

Later in the morning line-up, the resident Goldfinch belts out his full breeding song. Late nesters, Goldfinches are still in the thick of feeding nestlings. The insistent calls of the young Goldfinches, “Chippee, chippee”, won’t be heard quite yet.

Starting my day out by listening to the songs of birds is truly one of the best delights of summer.

« Beneficial for Birds, Fun for You – It’s Time to Provide Water
Attract Birds by Adding a Snag to Your Yard »