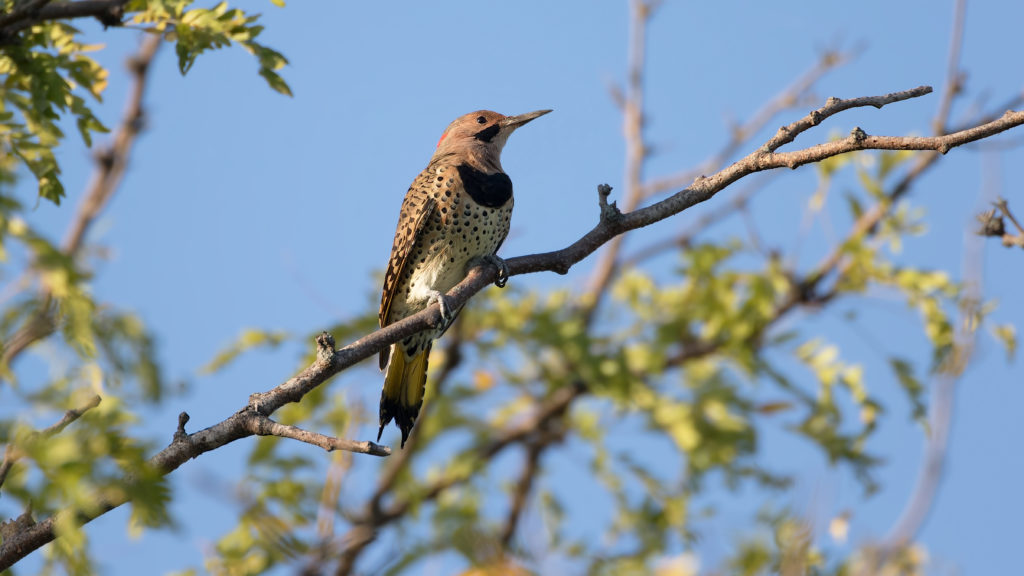 Northern Flicker in a snag, By Jan Palland

I love it in the spring when I hear the sound, “wicka, wicka, wicka”. I look to the treetops, especially exposed snags, hoping to find the pair of Northern Flickers engaging in courtship behavior, as tipped off by their calls. With beaks pointed to the sky, they move their heads side to side in unison while calling, tails fanned out. The Flicker Flamenco Dance is one of my favorite local treats to watch.

Northern Flickers are a woodpecker, and one of the few that can be found feeding on the ground. Their specialty is ants! There was a study done of the stomach contents of 700 Northern Flickers which showed that 98% of them had eaten only ants, with one count at 3,000 and another at 5,000 ants. 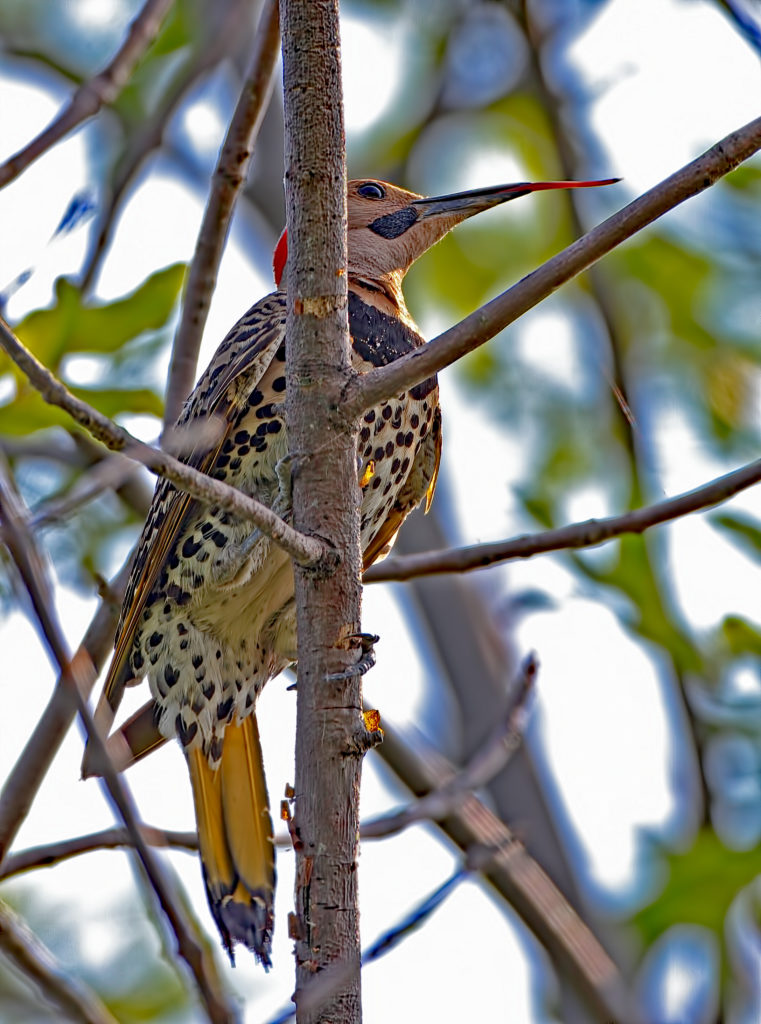 Perhaps one of the most interesting features of Northern Flickers, as with all woodpeckers, is their ability to extend their tongue far past the end of their bill. In fact, Flicker tongues extend two inches beyond their bill. The tongues of birds are comprised of long flexible bones with a soft tip, collectively called the hyoid apparatus. At its base, the Flicker’s tongue splits into two branches called horns which curl under the jaw and wrap around the base of the skull, extending over the top of the skull and meeting near the nostrils at the base of the bill. The tip of the tongue is highly sensitive, allowing Flickers to feel the ants they are catching. As well, they have very sticky saliva which allows them to catch many ants at once with the saliva being extra alkaline to negate the ants’ acidic defense to being attacked! 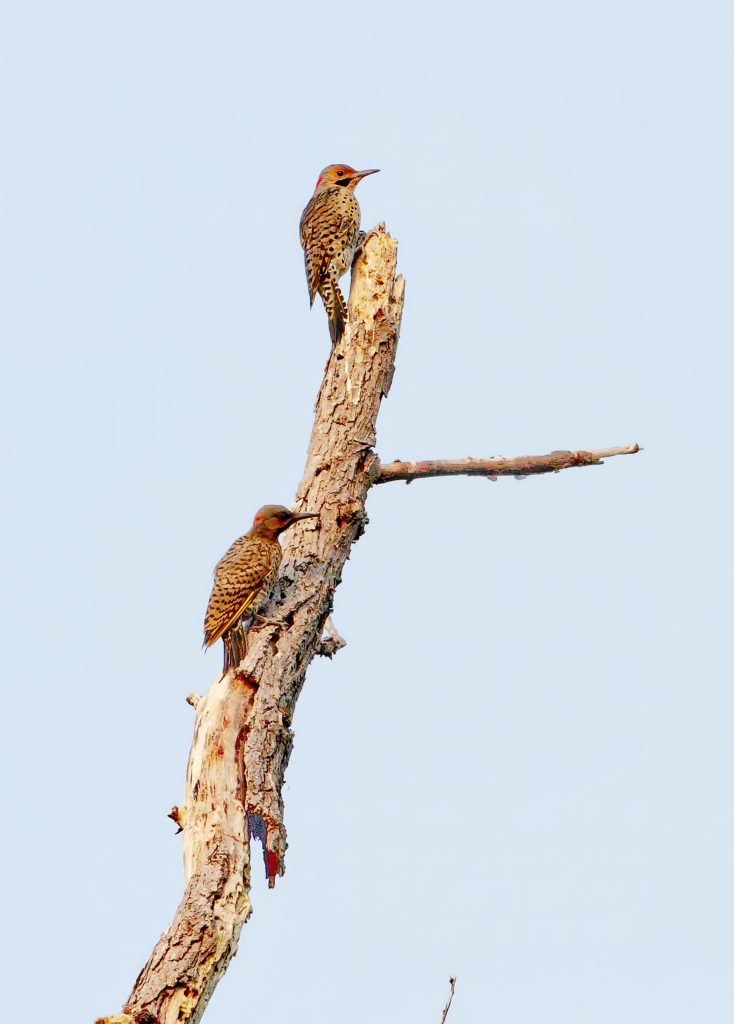 Two Northern Flickers on a snag, By Jan Palland

Northern Flicker males and females differ very little in their appearance. The male has black malars, marks that start where the beak meets the face and travel down at an attractive angle on the cheek. The black color in the plumage of Northern Flickers comes from pigment (melanin) that adds strength and durability to their feathers. This is quite necessary when you think of how much time a bird like this is entering and exiting from a cavity to tend to its young. Most of their tail is black, an adaptation for strength where it is needed a great deal.

Another unique adaptation of the Flicker is the fact that two of their toes point forward and two point backward, this zygodactyl arrangement provides extra grip on the bark of a tree, especially since the fourth toe can be spread more to the side when needed. Their tail feathers are also of special design, with a reinforced shaft and pointed tips, creating a sturdy third part of the tripod as they move on the sides of trees. Northern Flickers have a couple of ribs that are abnormally large which allows for extra chest muscle attachment, making the physical demands of being a woodpecker easier. 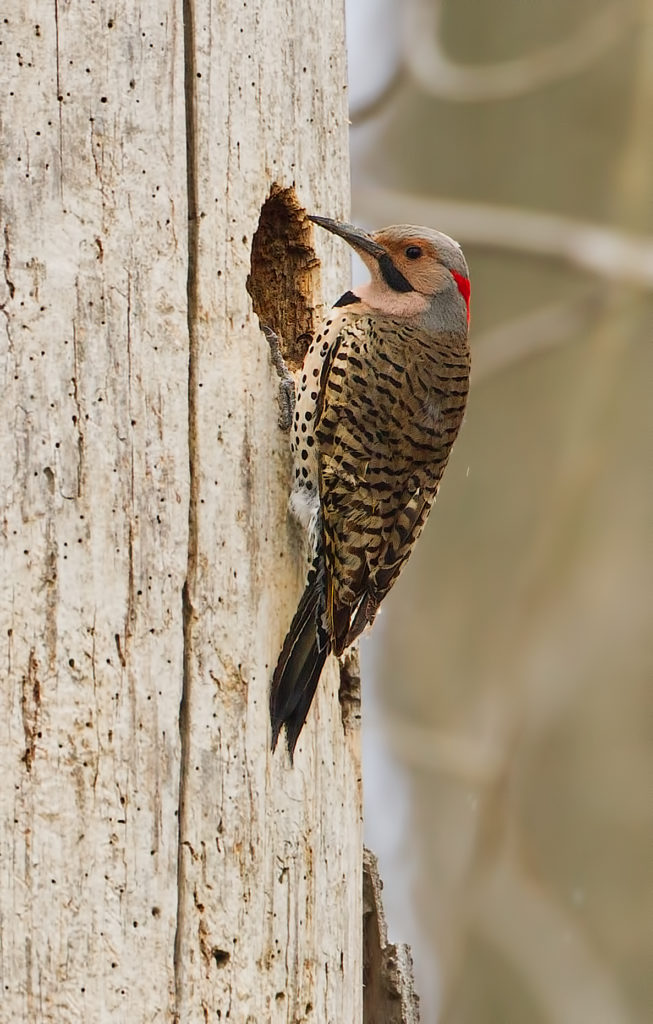 Flickers create a cavity that they chisel into a tree for nesting purposes. Northern Flickers are built to withstand the hammering blows needed to create the cavities because of a bone that projects from the top of the upper bill and acts as a stop, as well as having extra cartilage between the skull and the bill for shock absorption. Cavity nesting birds are usually more successful than birds that use open nests, with a higher survival rate for their young because they are protected from poor weather conditions and predators. Woodpecker eggs are white, not needing to be camouflaged inside of the cavity.

Woodpeckers are indeterminate egg layers, which means that they do not lay a specific number of eggs. This allows them to replace eggs that may have been lost to poor weather conditions or predators. One egg is laid per day, with the parents taking one of two roles – standing guard nearby or engaging in mock incubation which lasts usually under 30 minutes. The guarding and mock incubation continue until all eggs are laid, at which time real incubation starts. Another interesting fact about woodpeckers is that the male incubates the eggs overnight, the opposite of most bird species. Both the male and female develop a brood patch on the upper belly and lower breast, where feathers fall out and bare skin is exposed to effectuate the transfer of the heat from the adult to the eggs and young. The amount of oxygen in the nest cavity is a reason for shorter incubation in the Northern Flicker. The end result is that the eggs hatch sooner with the baby birds being more immature than most other birds. Yet within 24 hours, baby Flickers are able to begin crawling up the cavity walls toward the entrance in order to beg their parents for food. The Northern Flicker adults have a crop, a specialized expandable pouch, where they can cache larger quantities of food to feed their young, allowing for less trips back and forth to the nesting cavity. 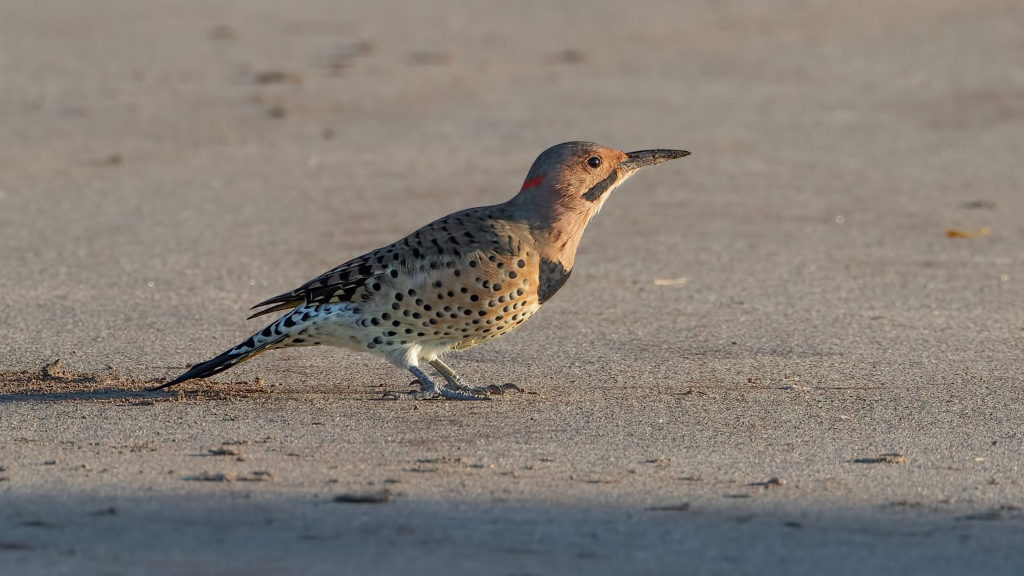 How cool is it that Flicker cavities that are no longer being used by the woodpeckers are used by some duck species for nesting including Wood Ducks, Mergansers and Bufflehead.

All woodpeckers have a flight pattern that makes them easy to recognize. Instead of flapping continuously like most small birds, woodpeckers flap-bound which means that they flap which causes their body to rise and then they tuck their wings and glide, losing altitude as they do. In flight, the Northern Flicker is a little steadier than other woodpeckers. However, the white rump is a helpful diagnostic field mark when the Flicker is in flight.

Flickers are a treat with their unusual plumage. I hope you see many during this Fall migration